Gender and Patents project in Pitch it clever competition SCC statisticians, Associate Professor Sue Finch, Dr Sandy Clarke-Errey and Cameron Patrick, have been collaborating with Dr Vicki Huang from Deakin University and staff from IP Australia on a project that examines gender differences in the granting of patents.

You can learn about the project in their 2 minute video entry in Universities Australia Pitch it clever competition: https://www.pitchitclever.com.au/entries 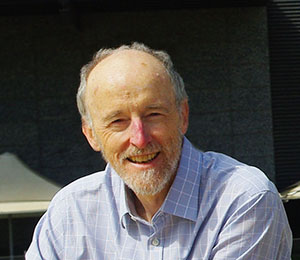 The Statistical Society of Australia offers several awards to its members, honouring their contributions to the statistical community. Read the citation here for Ian Gordon's 2020 Service Award.

Professor Ian Gordon of the University of Melbourne has a long history of service to the Society. After 11 years of service on the Victorian Branch Council, he stepped down in 2019. Ian led the Victorian Branch as President from 2009 to 2010, taking on the role in the wake of the 2008 conference debacle: his steady leadership helped to ensure that the Victorian Branch, and the Society as a whole, was able to recover. For example, Ian was instrumental in carrying out a survey of Victorian Branch members to canvas opinions about strategies for recovery, and he led the Branch in a resurgence of activity: increasing the number and variety of Branch activities, thereby increasing the participation of members. In 2012 the Victorian branch was incorporated; during his tenure as President, Ian oversaw the process of revision of the Constitution and application to achieve this important outcome.

Ian’s ability to gently guide new branch council presidents, vice-presidents and members, and his exhaustive knowledge of the Branch Constitution and Regulations made him an incredibly valuable member of the Council. Since stepping down from the Council, he accepted an invitation to join the newly convened Advisory Committee for the Branch, and thus he has continued to provide advice to the Council on important and strategic matters.

Further to this formal service for the Branch, Ian supported archiving the history of the Branch; for example, as part of our 50th anniversary celebrations in 2014, he accessed the archives to provide the SSA with insights from the very beginnings of the Vic Branch. He has regularly accepted invitations to present monthly branch seminars and was named the Belz Lecturer in 1995.

Ian has contributed more broadly to the Society and the statistical community as a whole. He was on the SSA’s Accreditation Committee from early 2008 to late 2013. In addition to his keen mentorship of junior statisticians, in 2018 he chaired the E. J. G. Pitman award prize committee at the Australian Statistical Conference (joint with the International Society for Clinical Biostatistics Annual Meeting) in Melbourne.

Ian is passionate about promoting the value of quality statistical science to the broader community. For example, he has played an important role in the resolution of high profile issues, including legal cases, such as the landmark class action over transvaginal mesh implants (Johnson and Johnson, and Ethicon, 2019), Hazelwood mine fire enquiry (2015), and the Haile-Michael case against Victoria Police (2013). A team of statisticians provided expert analysis in a class action over the use of mesh implants.

On 21 November 2019, the Federal Court handed down a judgment in a long-running and large class action over the use of transvaginal mesh implants. Shine Lawyers acted on behalf of 1,350 women against Johnson & Johnson, and Ethicon. Federal Court judge, Anna Katzmann, deliberated for over a year and considered a huge amount of evidence amounting to more than 5,500 documents, including statistical analyses and epidemiological research. Professor Ian Gordon was engaged by Shine Lawyers, and acted as an expert witness, appeared in court and was cross-examined.  His written and oral evidence was cited extensively in the judge’s 1500-page judgement.  Ian, in collaboration with Dr. Sandy Clarke, Dr. Sue Finch and Ms. Rachel Sore, from the Statistical Consulting Centre, carried out meta-analyses of evidence from 438 studies of stress urinary incontinence and 130 studies of pelvic organ prolapse, and provided expert opinion on evidence, including commentary on evidence of other experts. The judge ruled in favour of the women and against the companies who sold the mesh products. Professor Ian Gordon appeared as an expert witness at the Hazelwood Mine Fire Inquiry in September 2015, in Morwell. Ian Gordon said “It has been re-established to address a new term of reference: did the fire contribute to an increase in deaths? As usual in these contexts, much need for careful statistical communication, in the two days of examination and cross-examination. Among everything else, I was obliged to explain the P-value and confidence intervals.” He contributed substantially to the Inquiry as an expert. Some of his analyses are explicitly included in the report, and he is quoted directly in places. Click here to go the Hazelwood inquiry report 2015/2016 On the thin line between law and prejudice

THE term ''racial profiling'', which came into use in the United States about 20 years ago, is described as "a concept applied to police behaviour in their interactions with racial and ethnic groups".

No one should be stopped by police just because they're black

The brave legal fight of six young African Australians can bring positive change to our basic rights to freedom.

YOUNG men of African origin are more than twice as likely to be stopped, searched, and questioned by police than the rest of the population in parts of Melbourne, an analysis of a police database has revealed.

Victoria Police has promised to investigate how it deals with ethnic groups after it settled a civil case over racial profiling of Afro-Australian men. CHILDREN born through sperm donation belong to families that function just as well as others even though most of these children are not told they were conceived with donor sperm, an Australian study shows.

A STUDY of international students in Victoria has found that a large majority have experienced threats to their safety.

A Gold Coast hospital is examining staff claims of a possible cancer cluster.