Pies and doughnuts are off the menu! 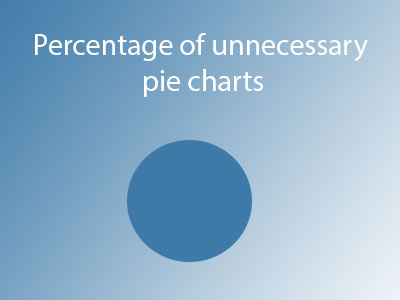 Pie charts and their close cousins, doughnut charts, are part of our staple diet of graphs of data – we find them on blogs, in newspapers, in textbooks and in presentations at work.  But one way to annoy your unassuming, mild-mannered local statistician is to ask for a pie chart (or worse, a Krispy Kreme).

What is the problem with pies and doughnuts?

Pies and doughnuts fail because:

Four sure signs that your pie or doughnut is failing: 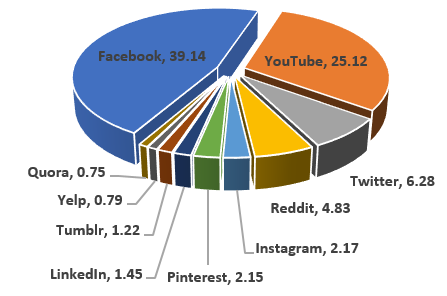 (Market share of visits to social network sites in November, 2017)

Here's an alternative graph of the data: 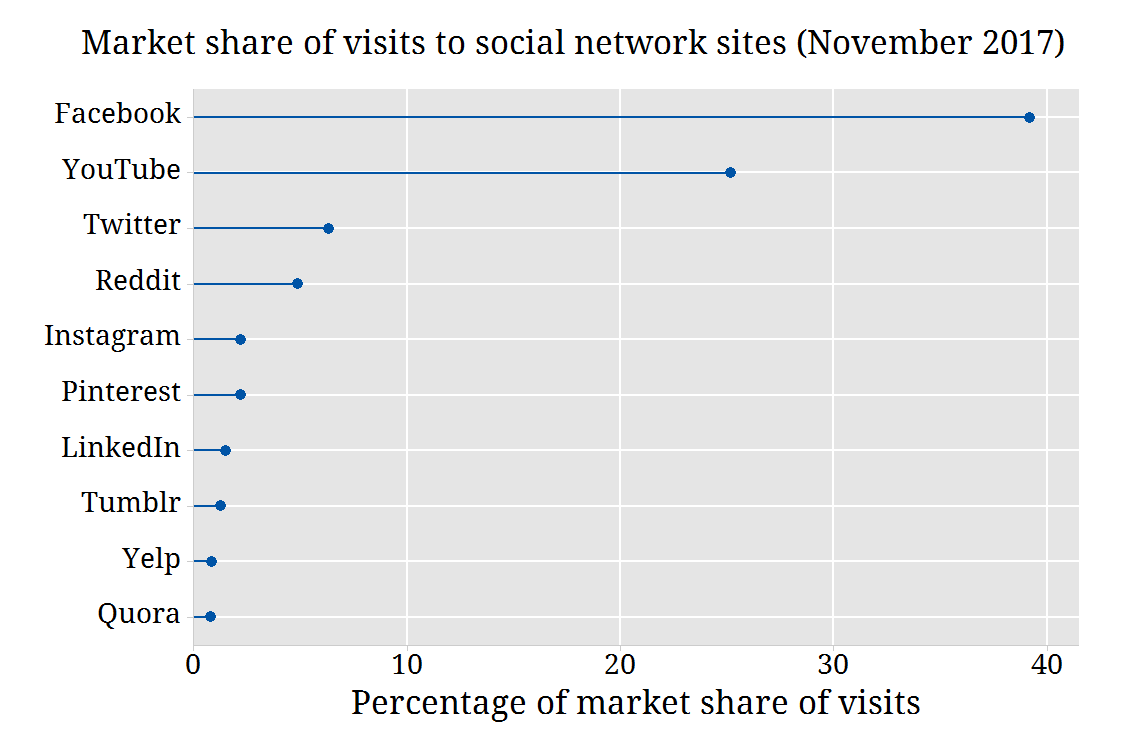 Some people might say this graph is boring, but as Edward Tufte warns in his book Envisioning information:

"Cosmetic decoration, which frequently distorts the data, will never salvage an underlying lack of content."

Why is this chart so much better? 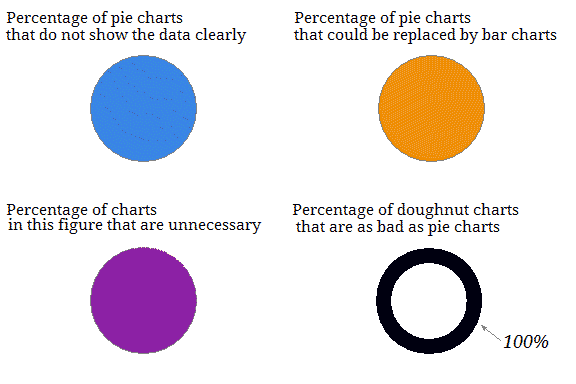 That’s what a recent study  claims to show.
“Reading  Literary Fiction Improves Theory of Mind ”
appeared in Science this month.

There were five different experiments with people randomised  to either two or three groups. One group was assigned to read literary fiction – works chosen by  literary prize judges, and including authors such as Jane Austen and Anton  Chekhov.  The other groups varied, and were  assigned to read popular fiction, non-fiction or nothing at all. The participant completed the “Reading the Mind in  the Eyes Test” (RMET), which was designed by Simon Baron-Cohen (cousin of Sacha  Baron Cohen of “Ali-G”, “Borat” and other fame ... but I digress).

You can do the RMET yourself

The RMET is supposed to measure your capacity for  understanding other people’s mental states.   You look at 36 different images of a pair of eyes, and have to say what  the eyes are showing (for example: impatient? aghast? irritated? reflective?):  four choices for each pair of eyes, one of which is deemed to be correct.

The groups that were allocated to read literary fiction did  better than the groups allocated to read nothing, or such riveting pieces of  non-fiction as “How the potato changed the world”.
In four experiments, the comparison of groups was “statistically  significant”; on the RMET test the difference in means was between 1 and 3  (pairs of eyes); to put that in context, we are told that scores between 22 and  30 (out of 36) are common.

What is really going on here? What should we make of this? Can it really be true that reading a bit of Jane Austen makes the reader more understanding of others, and insightful?

There is a crucial aspect of the experiments that needs  highlighting. Reading the research article itself, I was wondering … how long  did the intervention go for?  Did they  read the allocated works for days? Weeks? Months?  The use of the word “temporarily” in the  abstract, and “short-term” in the text, gives a hint.  And … who were the people recruited for the  experiments?  Were they the usual  suspects, university students?  But I had  to rely on media sources to discover that the subjects were recruited from  Amazon’s “Mechanical Turk” service, which advertises small jobs to be completed  for a few cents or dollars.  They were  paid $2 or $3 each to read for a few minutes; see the New  York Times blog post.

Neither of these details is in the Science article.  So the  subjects were from a highly selective group of the population (would you sign  up?) which may or may not be a problem, and they read for a few minutes,  according to the New York Times’ account.
Should we trust these results?  Although the effects were small, they were  consistent in their direction, there were five of them, and they were  independent, randomised experiments.  At  face value, this is evidence of a real effect.

But it is all very brief and may be ephemeral.  It seems possible to me that the data are  consistent with a kind of “warming up” effect, similar to stretching and  jogging before more vigorous exercise.   The more literary works may focus the mind on its potential for empathy,  causing the performance on an empathy test immediately following to be slightly  better than otherwise, on average.   Cricketers catch balls before fielding; tennis players warm up by  hitting against their opponent for a few minutes, a student doing an oral exam  in French may listen to some spoken French immediately beforehand.  Why? Because it “tunes” and focuses the body  and mind to the task immediately following.   If the pre-task activity is not as relevant, the warm-up effect does not  occur.  This study may be observing this  effect, and no more.

Is this effect worth having?

IS IT A RINGING ENDORSEMENT FOR READING LITERARY FICTION?

Well, the experiments, taken together,  suggest there’s no harm.

But I think  it’s a stretch to say that reading a few minutes of any text can really make a  person more understanding and insightful over a long period of time, and the  authors do suggest this: “reading literary fiction may lead to stable  improvements”.  Put it this way.  If, instead of doing the RMET straight after  the required reading, the test was done six months later, do you think the  results would show a benefit of the literary fiction over the non-fiction?

I would feel a lot less uneasy about the article if its  title was “Reading Literary Fiction Improves Theory of Mind (for 15 minutes,  anyway)”.

NOW BACK TO SENSE AND  SENSIBILITY.

You might have seen this study,  by Anna Smet and Richard Byrne, in the news.  Captive African elephants were tested to see  if they could interpret human pointing to find hidden food.  The elephants had to choose between two  containers of food – so there was a 50% chance they would be right if they were  guessing.

The elephants were tested with different ways of “pointing”,  including the ones in this diagram:

One way included only using the eyes (gaze only).  The experimenters also included a condition  with no pointing at all. They called this “no point control”.

The elephants did a number of trials with each different way  of pointing, so the researchers worked out the percentage of times that an  elephant was correct.  If elephants were  guessing, the percentage correct would be 50%.
Our graph of the study results shows the mean percentage  correct for the elephants for each type of pointing.  The lines from the squares are some more  technical detail; they show uncertainty. WHAT DOES THE GRAPH TELLS US?

The researchers interpreted this pattern of results to mean  that the elephants understood the experimenter’s communicative intent.

HOW CONVINCING IS THE EVIDENCE?

This looks like a good study.  It’s a bit more complicated that my  description here, but you can check it out yourself, and even look at videos of  the experiment. Here’s just a few of the reasons:

HOW DOES THIS  COMPARE TO BABIES?

On average, elephants were correct 68% of the time when a  whole arm ipsilateral point was used. (“Ipsilateral” means “on the same side of  the body”.) The researchers tell us that one-year-old children get 73% right on  average on this type of task.

The researchers described a couple of different explanations  of why elephants might be able to interpret pointing as communication.